The second episode of my serie about retro-engineering on old 90's video games. Today let's talk about the famous Beasts and bumpkins.

The second episode of my series about retro-engineering on old 90's video games.

What it is exactly? It is trying to analyze the compiled code of old games (around 20 years old) in order to patch them (changing behaviors or correcting bugs) or to try to find traces of uncompleted features or even hidden ones!

There are also others important ideas behind this hobby...

Note: to understand how I work, you can read my first post of this series. 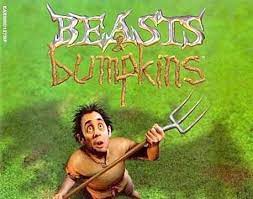 Beasts and Bumpkins was released in 1997 on PC.

It is a real-time strategy game like there was plenty of, by then. The theme of the game is the following: you are a landlord in exile, and, with a few peasants, you have to survive (enemies, beasts, wizards...) and develop your villages, through 30 different levels.

When released, it was compared a lot with Warcraft 2, however there are a lot of differences. For instance, you don't have to be focused a lot on the military matter, there is no specific equipment available. The main topic here is that your villagers survive and reach some objectives. All the main structure of the game relies on the following:

That's it for the main description.

I discovered it with a playable demo available on a CD-ROM in august 1997. I liked the fun that the developers put on it, especially the look and the voices of the characters (both for the English and the French version at least). The game was not finished yet, and the previews were announcing a lot of fun, a level editor and a multiplayer mode up to 4 players (PC Jeux, #1, August 1997).

When it was released a few weeks later, it was in the middle of a fertile production of others real-time strategy games, so it was hard to make the difference, and the game did not, receiving average critics and notes like 70% or 13/20. Critics said that despite the fun aspect, the missing multiplayer mode was a serious lack even in that period. Stuck between the release of hits like Warcraft II or the first Age of Empires, it was quickly forgotten. It's sad because there is a lot of fun in it, and the presence of the announced multiplayer mode would a have helped a lot!

When I played the demo, I thought "What a fun game! I will buy it one day!" 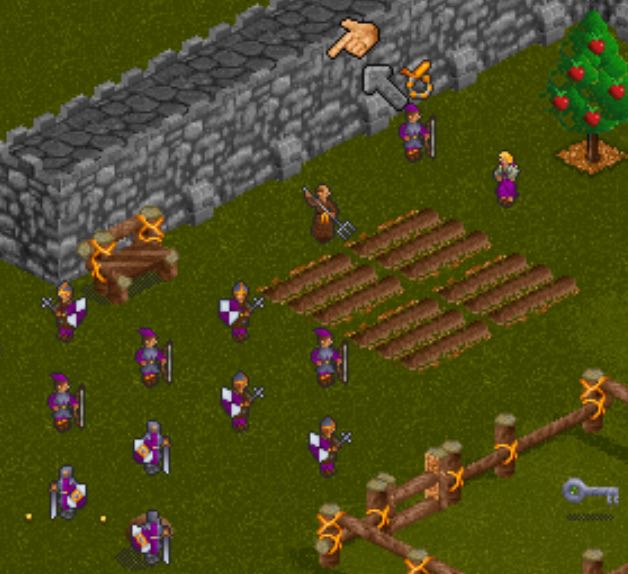 Above: the developers had a certain sense of humor. Do you see the priest in the center of the screen? He will accept to give you the secret key to the right only if you bring to him a young lady for... company.

Well, as many others I forgot this game for years until I found it for something like 5 EUR in a second-hand video-games store. Enthusiast, I started to play at it, but dropped it after a few hours, it was in 2007. Then, during the pandemic of 2020, I found it again in my stuff and decided to play it and finish it this time. While playing, the fun was still here but I was frustrated by a few things:

While I couldn't do anything for the two first things, I was very surprised for the last one. I mean, you can look on the Net, you will find many references regarding the fact that it exists a cheat code for this game, and sometimes it is mentioned that it works only for the demo version. Well, I tried everything, on the demo or the full game, it does not work! From that, I thought "A video game without cheat? Seriously!"

So, at first, I used the old good method of the Cheat Engine: by simply scanning the memory, you just need thirty seconds to get unlimited money. But it was still frustrating. I was sure that there could be more under the hood! 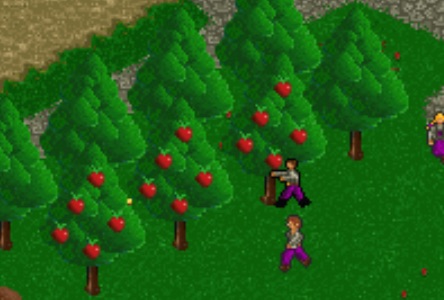 Above: in some levels, you can ease the living conditions of your peasants by allowing them to make cider.

Two years later, I mean today, I finally finished the game, and well, sometimes, I cheated a little bit, I admit it. So, what happened? First, the game becomes quite repetitive after some times. Then, a few weeks ago, I suddently thaught about what I found in USM98 (see the first post of this series), and I wondered "What if the developers did the same for B&B? Did they put a hidden cheat menu? Did they let traces of unfinished features?". And then I started to work on it, and I used the same tactics and tools as I have used five years ago for USM98, and this is what I found.

1) What is probably traces of the uncompleted multiplayer mode

The multiplayer mode was announced but missing in the game. A guess was that it was dropped out to meet the schedule of the release, a classic "issue" in the world of the software development. This guess was probably good because I found that:

2) The cheat mode... is actually a kind of editor mode

When inspecting the call graphs and the string dictionary of the game, I found interesting things, like:

You guess how exciting it was.

There is actually a cheat mode in this game. To enable it, you need to edit the .exe of the game with an hexadecimal editor. At the spot #534691, replace 0 by 1. Then, when you launch the game, you should see a small cheat label on the top right corner:

But now, how to trigger it? This time, with the help of another developer, we were able to make the following discovery: just press F11 during the game, it will switch to two possible cheat modes: 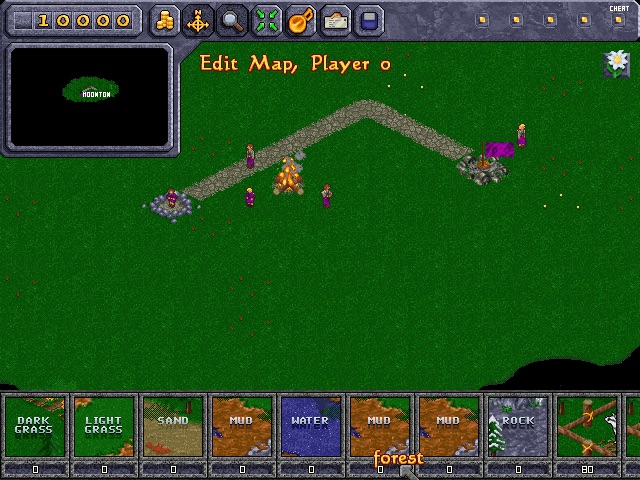 Above: the first iteration of the cheat mode. 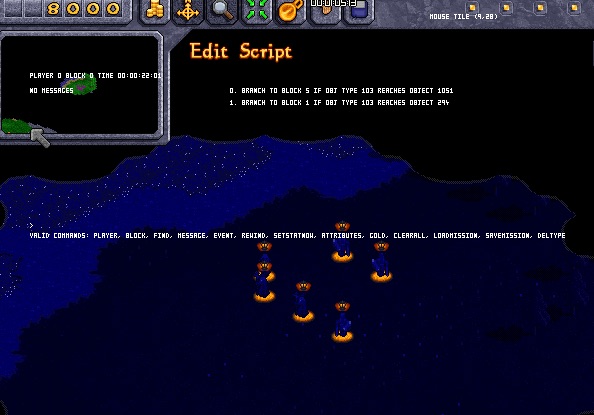 Above: the console allows you to do plenty of things, including as showed below: change the fertility of the peasants. 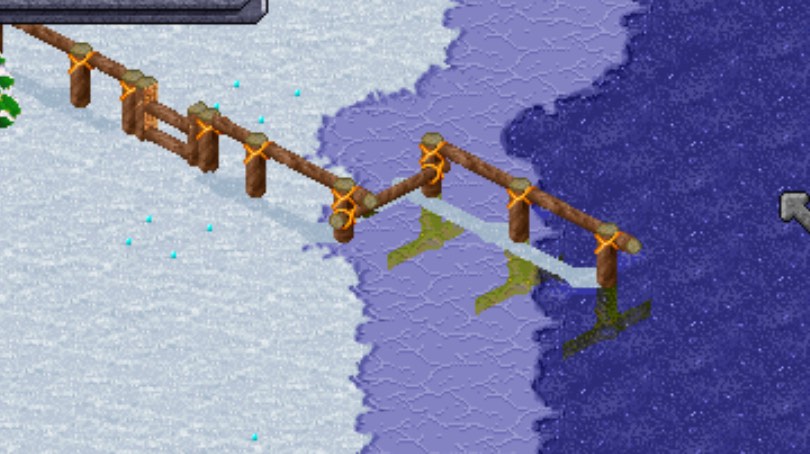 Above: with the cheat mode, you can ACTUALLY and REALLY close the fence around your village, preventing nasty wolves and zombies to venture into it by a tiny void space between the forrest and the fence.

Above: another trace of the developer's tools, you can show the FPS.

That's it, and that's a lot. Once again, I have a though about the developers who worked on this great game a quarter of century ago and were not able to finish it completely. Thank you for all the fun you put in it! 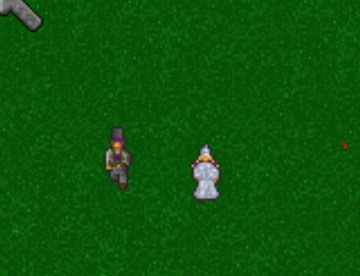 Above: one of the last mission, and a very difficult one, is to make two young people in love to get married at the local church before getting eaten by wolves.

As you can see it in the comments, one of the reader (Brave) tried to discover new cheats. And below is what he found. Enable the cheat mode of course, press F11 once, and type the following:

Or, just press CTRL + F6 and it will disclose the whole map.